My neighbor at one time sold used cars.  For obvious, organic brain disease-y reasons, he is no longer working.  When he is not waiting for disability or social security checks I believe he still sells the occasional car.  This is in addition to whatever illegal things he is doing by selling gold or trying to sell the worthless bedbug ridden discards he finds in the dumpster next to our apartment.
A few months ago, my neighbor excitedly pointed out his latest purchase.  For $800 he bought a blue heavily used Astrovan which he claimed had only 120k miles on it.  He said he was going to clean it up, detail it, and sell it for $1,600.  But left it open to the possibility he might give the car to his neighbor upstairs to get "fringe benefits". I shudder to think what that would entail.  He reminded me he sold this guy the car he currently drives, a white police interceptor complete with a polished chrome searchlight on the drivers side door.

He kept to his word.  Over the course of two or three months, he would wash this car religiously every other day regardless if the car was driven anywhere and regardless of any drought precautions that were in place at the time.  Through his hardwork and dedication he was able to obtain a wonderfully dull, faded, evenly scratched surface you can only get through diligent repeated soapless, polishless carwashes with old t-shirts and dishrags. 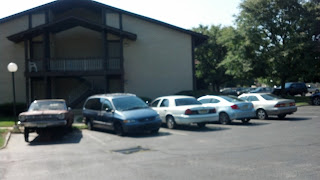 This van and his rusted trash-heap are taking up the best parking spaces for our building.  Neither car moves from these spot.  He is convinced that if he were to move the cars to another spot they would be ripe for the taking by thieves.
I think its obnoxious that someone:
1) WHO ISN’T SUPPOSED TO BE LIVING HERE,
2) Does not have a license due to his ALCOHOL INDUCED DEMENTIA and his repeated DUI’s,
3) DOESN’T DRIVE,
4) DOESN’T WORK,
...now has two cars, in the best spots, and one of them is up on jacks and bricks.  It is as though he wanted to make sure when I invited friends or family over they would know before they even got out of their cars that I was renting in a real grade A joint.
One night while Sam and I were having dinner we heard a fight upstairs.  Their fights are aggravating not because they are having them but because it's incredibly hard to discern what they are saying. It's as if the teacher from the old peanuts cartoon was getting into an argument with her male counterpart. Later that night I saw him washing the cars again but this time he moved the van to the other side of the parking lot  To showcase the car better he parked the car at an angle so that it took up two spots.  Spots in the area I typically park my car so that I don’t have to worry about him getting the itch to clean my car with his dirty dishrags.
The very next morning, it had a for sale sign on it. $1,600 OR BO.  Yes.  That is his number if any of you are interested.  But I suggest you keep reading before you call.
On Labor Day, I labored an evening shift at the hospital.  I got home at nearly 11 at night.  When I pulled up I saw Tony, he looked panicked he was pacing back and forth on the sidewalk in front of our apartment.
“Tony? Is everything okay?”
“No.  They are coming for me, man.  I gotta go.” This would not be the first time the cops have come to the house, so him getting picked up is not something outside the realm of the possible.  He was drunk.  I didn’t have current evidence to back that up, only probability.  It was late.  He was outside.  He wasn’t making a lot of sense.  Plus, he is always drunk.  It would be pretty fantastic if he is this freaked out during one of the few times in his life that he is sober.
“Where are you going to go?”
“I don’t know.  I just gotta...”  He trailed off for a second as he watched a car drive up towards us and then pass. “...go. They are coming for me.”
“Won’t they find you? Don’t you still have that ankle bracelet on?”
“No, man.  I cut that off days ago.”  He smiled and suddenly he did not seem so panicked.  He pulled up his pants leg to reveal his bare ankle.
“Who is coming for you then?”  I said moving towards my front door.
“Eh.  The assisted living people.  You know?  Bonnie has had it.”  He is walking a few steps behind me.  When I stop at my door, he walks ahead to the stairs leading to his apartment, each action he makes is methodically taken.  The simple act of moving his hand to put it on the banister appears to channel as much focus as someone trying to levitate or bend a spoon with their mind.
“Bonnie is going to stick me in assisted living.”
“Why?” As in why hasn’t that been done ages ago?
“We had a fight. A bad one.  She is kicking me out and sending me to assisted living.”
I gave the necessary moment of pause to reflect on the tragedy of it all.


“Alright man.  Goodnight.”  I cracked the door open and he started to climb the stairs.
“Yeah.  Goodnight.”
Once inside I told Sam about my recent Tony encounter and Sam told me of some epic fight they had earlier while I was at work.  It consisted of a lot of screaming, storming around the apartment, and things hitting the floor.
The next morning when I went outside to head to work I saw this:
A scene played out in my head.  Tony after speaking with me went inside realizing the error of his ways.  He sat down on his couch, turned on the TV, told his girlfriend to shut up and get him a miller light.  Everything was fine, until he looked outside.  He peeked through the parted space in the venetian blinds created by his index and middle finger.
A black van with tinted windows was stopped in the parking lot.  Figures dressed in black lept into the night from a sleek Shady Acres Nursing Home activity van.  They were here.  He quickly scrambled to the front door and swung it open.  They were standing there, holding up giant 100 ml syringes of Haldol.  They reached out to grab him and he quickly slammed the door back catching a hand holding a syringe in the door. He pushed against the weight of 3 nurses aides as the hand dropped the syringe and retracted back outside.  He locked and chained the door as the men on the other side of the door knocked and pleaded for him to open it.
He moved away from the door.  He was trapped.  Bonnie came out of the bedroom to see the commotion.
“They are here!”
“Who?”
“THEM.”  He said still backing away as Bonnie passed him to look out the peephole.
“Come on Tony. Calm down. I am sure its nothing. They...oh my God.” They were trying to break the door in. “Quick get the phone!  Call the cops!”
“Who did you call?  What am I going to do?”  He went to the kitchen and grabbed the phone.  He noticed the kicking had stopped.  When he came out of the kitchen, Bonnie was standing there the door was wide open.
“I am sorry!  It’s for the best!  Honey!”
“My god Bonnie, what did you do?!”
“Mr. Tony.  Calm down.  We are here to help.  We are here to take you to a nice place...” He crept up to Tony with his hands up unthreateningly holding a straight jacket its unlocked buckles jingling with each step.
Tony hit him with the portable phone with such force that the phone burst against his face.
“You’ll never take me alive!”  He turned and ran across the living room and lept through the glass window out of his second story apartment.  He deftly tumbled in the grass and lept to his feet already moving towards the blue van.  He threw the car into drive screeching the tires as the van lurched forward.  The nurses in black drew pistols and fired.  They blew out two of his tires with sedative laced darts, but Tony swerved keeping control of the car.  A crack driver, a skill he forged through years of boosting and selling cars.   The van exploded through a gate where a security guard had to jump out of the way to avoid the blue Astrovan trailing sparks from its rims.


But, there was no broken glass in the yard and if he escaped, why did he drive the car back?  I conceded.  After he spoke to me, he went back inside had another fight with Bonnie and wasn’t going to get picked up and taken away by cops or assisted living personnel.
He left in the van.
Drunk.
Hit a curb.
Hard.
With both tires.
The end.

Sam, a day later told me that on that night he nearly hit her with his van.  She was walking Dante and he threw the van into reverse and drove the van up onto the sidewalk before throwing the car into drive and driving away.  Nonetheless, I did not see Tony for days.

Then one day I was sitting in my car in the parking lot organizing my errands on a pad of paper when he appeared.
“Hey Tom.”
“Oh.  Tony.  Hey.”
“I just wanted to tell you.  Eh.  Did you see my car?”
“Yeah.  What happened? Are you okay?” I asked, feigning concern.
“Can you believe it?”
TOM DO NOT ANSWER THAT QUESTION.
“Believe what?” I stalled.
“Labor day night?  Some kids stole my car! You saw what they did to it?” he said amazed at his own lies.
“The tires?”
“Yeah!  They hit a curb.  Damaged the rims.  There was a regulator in the car...they had no idea what it was for so they just threw it in those bushes over there. They didn’t care.”  He pointed at this large seemingly impenetrable mass of vegetation across from our apartment.
“But you found it? In the bushes.  Where they threw it?” I asked hoping he would stop and realize just how stupid this story sounded.
“Yes.  Thank God there is no body damage.  The frame is good.  It’s just the tires and the rims.  But I wanted to tell you to be careful.  Lock your doors.  Keep your car parked here where you can see it.”
The irony of this advice is on the night he said it was stolen by the roving band of hoodlums was where it was parked.  He was parked right next to my car.  Just goes to show you never know when and where paranoid alcohol induced delusions will strike.
The for sale sign is still on it.  The price has not budged.  You might want to wait a few days I am sure with a few more car washes those tires will fix themselves.
Posted by Tominor at 1:06 PM