So.  Somehow, because of past GOP affiliations my wife has been getting the mailers sent out by the Republican Party for this upcoming state and local elections.   Normally, I find mailers complete and utter wasteful bullshit.  What is the point of effort to making bills and things paperless if these are just going to be mailed out?  The thought that these heavy poster magazine print flyers the size of a legal sheet are being mailed out DAILY to voters across the state is stunning.

But I find myself looking forward to receiving these flyers.  Like they are episodic parts to a story that I receive once per day by junk mail.

This is the first one I can remember getting.  Everyone in this photo looks uncomfortable.  The top caption reads "Keep New Jersey Moving Forward."  I unfortunately do not see how anything in this picture portrays that.  I suppose on some women's empowerment level they are achieving "forward".  But the I don't feel that having three women in different levels of power in government is inherently a "forward" action.  So once I cut that out from the theme what is "forward?"
FORWARD: The assemblage of vapid smiling rocking chair sitting color coordinated women talking to an elderly woman on an open porch.
Is the act of talking to constituents a forward action?  If these three women showed up on my porch with those dead looking eyes and open mouthed smiles I would quickly pull my grandmother inside the house until the zombies went away.

So after they visited this old white woman on her porch they changed their clothes...

And proceeded to talk to some nicely dressed white lady and presumably her 4 perfect white children. The caption reads "Rebuilding our economy, one step at a time."

You might ask: "But Tom, what does this picture have anything to do with rebuilding the economy?" The only answers I have are:
1) They are rebuilding the economy buy purchasing more clothes.
2) Talking to white blonde women and little Timmy.
3) Having Beck put her hair down and having Casagrande color her hair.
4) Dead, soulless smiles.
5) The mailers could have been printed in the state which would help the economy but there is no mention of that.

I love fake candid.  But this is tactical candid.  This photo looks so genuine.  Three ladies...hitting the town/village/strip mall and striking up conversation with a faceless beautiful woman and her perfectly dressed faceless family.  This family is so perfect they organize themselves precisely as to not obscure Jenn, Mary, and Carol for their photo op.  Nailed it.

How do either of these photos make me feel these candidates represent me?


I love this one.  It has an anecdote about how she was in the hospital after giving birth to her second son on the phone trying to fight for funding for woman's and children's health in the state budget.

Spoiler alert.:  She did it.

She increased funding by $135 million for a budget in 2014.  Then she called the nurse over to bring her "new born" and realized he was already 3-4 years old.
There is only one person I can trust in this picture and that is little Teddy.  His expression is perfect for how I feel about state politics.  Even Mr. Casagrande (or as I like to call him Steve "I-Love-It-When-You-Call-Me-Big-Casa"...Grande.) looks like he is strong arming little Harrison by pulling his shirt.

I need to practice my open mouthed smile.  They must have taken this photo the same day Caroline was talking to that old lady in the rocking chair because she hasn't changed her outfit yet.   She should know better because wearing the same clothes won't stimulate the economy.  But investing in big flags, rocking chairs, glossy white paints, and blue textiles might...

On the reverse sides of these flyers are generally negative attack ads, similar to the the ones Caroline Casagrande was offended by as a wife, mother and taxpayer.  The only difference is that her attack adds hit democratic opponents.

My favorite attack ad of theirs is this one: 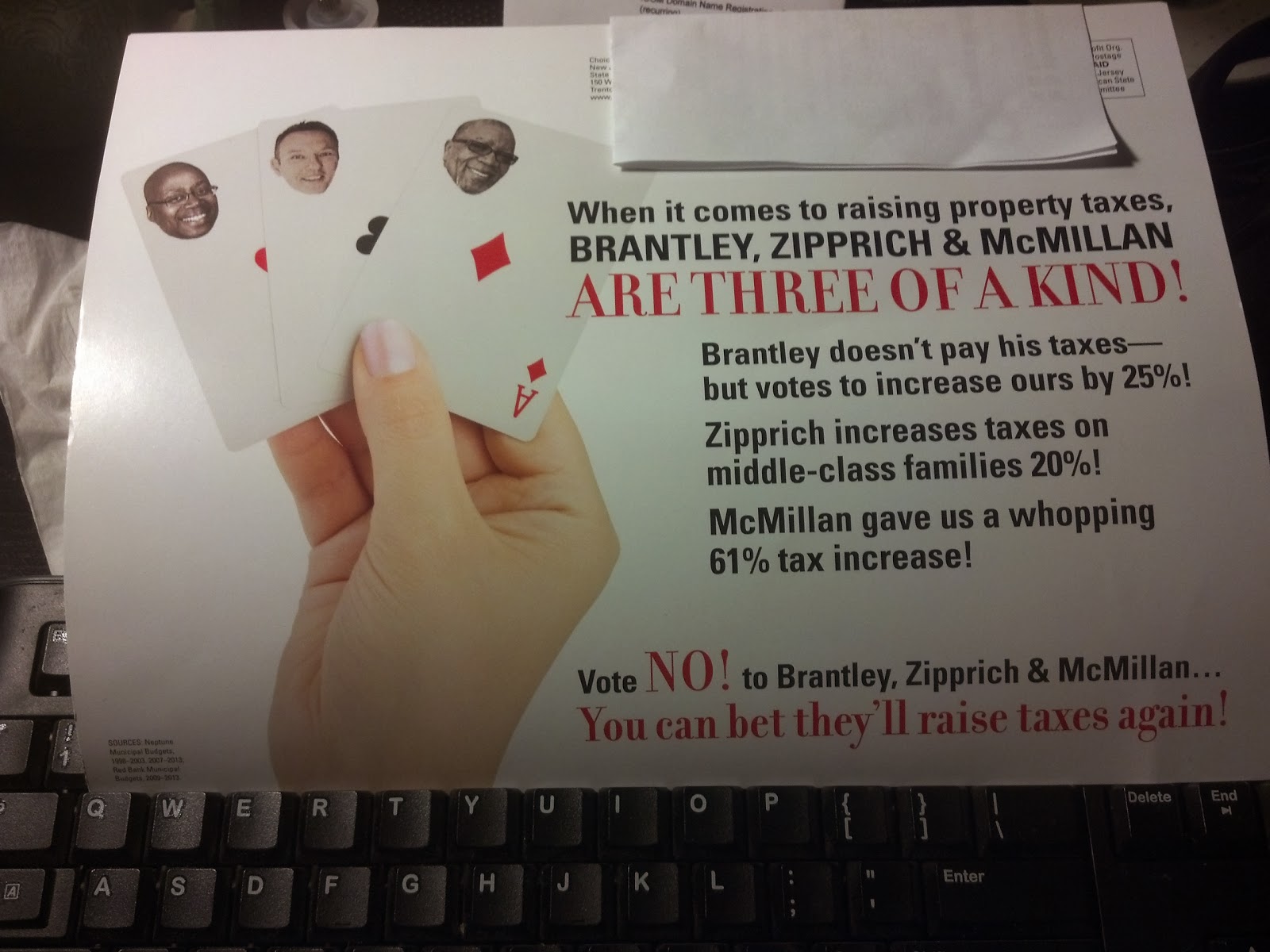 I've never seen something so NOT RACIST appear to lick at being racist.  You have four suites.  Two red suites.  Two black suits.  Shown here are the heart, club, and diamond. If those staged photo op images have precisely arranged wardrobes and people, one must assume the use of Photoshop has to be equally if not more thought out.  I feel like they had a point on a globe that they wanted to avoid desperately.  In that effort, they nearly circumnavigated the globe and hit the point from the other side.
Don't get me wrong.  I am in no way supporting these three guys simply because they are supposed to be the antithesis of the three women.  I am sure all six of them have their faults.  But, I don't get fliers from the three dudes, just the GOP.  And even with that said I don't think the primary color wearing women have made much of an argument in favor of them.  Maybe I should hang out in rocking chairs more often?  Or maybe this guy might have a point...

I will update this post as I receive more flyers.  I am curious how this story is going to end.
Posted by Tominor at 9:09 PM No comments: