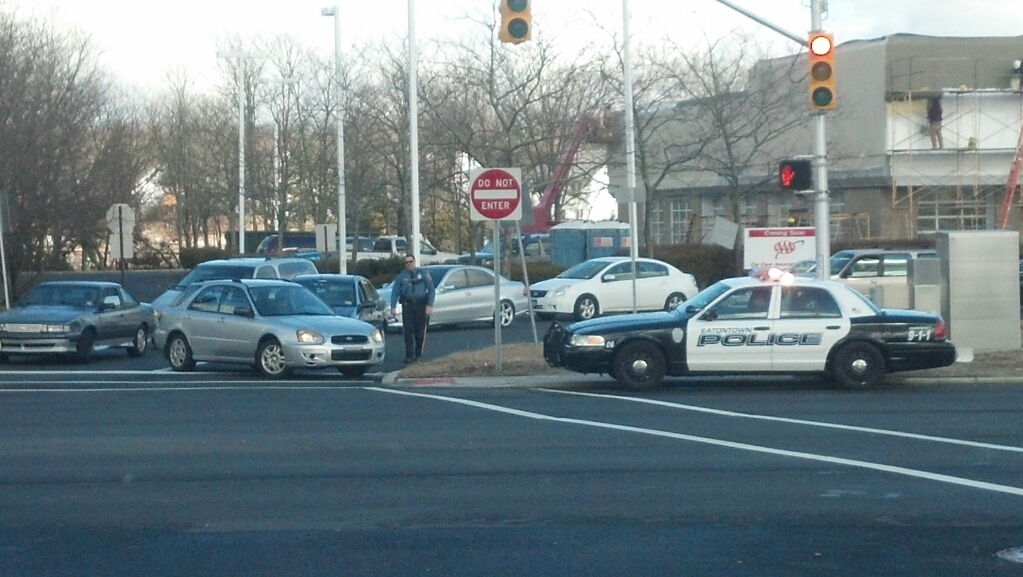 I need a faster camera.  A camera that can be ready to take a fairly decent picture faster than I can get my cellphone out to take a mediocre picture.  The above shot is taken with my android razor and its standard camera program.  What is being shown in the photo is a perfectly missed moment of irony which I will explain later to give you a moment to look for it.  It's still there. Faintly.

I was seriously driving all over Eatontown trying to fax college transcripts to a university before a Friday afternoon deadline.  The fax machine at Brookdale Community college refused to send the fax regardless of what number I fed into the machine.  Well, I could not actually do it myself because the clerk was adamant about her fingers being the one that strokes the Hewlett Packard touch screen.
After spending close to a half hour trying to leave the Brookdale college campus and their death grip level of traffic I made my way back towards Eatontown.  All the while keeping my eye out for locations that might have a fax machine.  They are no UPS stores.  No fax machines at 7-11's or Quik Cheks.  You can not send faxes from Post offices and I could see the look of betrayal in the Postwoman's face when I asked her.  I was the reason they were going bankrupt.

Perhaps the look was just the thought I was stupid waiting 10 minutes in a line for a service they have never had.

The Staples and Office max near me went out of business or moved.  I have now spent nearly an hour and a half since I walked away from that woman at Brookdale trying to send the fax that I SHOULD have been able to send there.  Which brings me back to the above car accident photo.  It is a photo I would have missed had I been able to send my fax an hour ago.  Fate.

In the distance there is a building under construction and within that block of stores is a "FedEx Office" location.  This is the place where I ultimately send my fax.  In the foreground there is a one of New Jersey's ingenious inventions of Urban planning: The NJ Jug Handle.  The cars are attempting to cross over route 35 to make left turns or enter the Eatontown Mall.  The driver of the silver Hyundai 4 door compact was just in a car accident.

Two accidents if you count his horrific hipster haircut as well.(not shown)

I'd like to imagine after the hipster was rear ended he looked up from the steering wheel and saw that he was physically okay he then surveyed his surroundings. In his side view mirror he can see the dark Nissan which struck him looking up from her steering wheel aghast at what had just happened.  He looks out of his drivers side window at the long line of cars stretching out their necks to warm up for some serious rubber necking.
The hipster quickly imagines what is next? Can his car still run? How bad was the damage? Should he call the cops? Was it his fault?  How much was this going to cost?  Should he call his insurance company?  Should he call the shift manager at Houlihan's to tell them he will be late to serve watered down drinks and speak down to the customers?   He is lost in a swirl of questions, lingering adrenaline, and head trauma.   Just when he considers crying in front of the police officers he sees something that quiets everything and puts him at complete ease.  A sign that reads: