So last week I went to walk Dante on the train tracks and I always take my camera because you never know what you might find or see.  As I leaving the complex I bump into Tony.  I knew I would probably never get another shot at this so I asked him if I could take a picture of him with Dante.  I could already tell he was drunk.  It was about two in the afternoon.  He patted his pockets and insisted he go inside for something to make him "look cool" for the picture.  So I waited, Dante grew more and more impatient.  Just as I began walking away, chalking up Tony's disappearance to him going into his apartment and forgetting to come back outside.

And I managed to put together a pretty quick photo essay.

So please allow me to introduce you to my neighbor, Tony.


As you can tell, Dante does not like him. He has NEVER liked him very much.  Maybe it is because he never could get his name right.  But here he looks genuinely panic-stricken.  He kept running back to me every time I backed up to take the photo.  This would throw off the focus of the picture.  I wondered if Tony reminds Dante of his previous owner.  Dante was a runway and was found along the side of an interstate with another dog in Virginia.  He was picked up by animal control and taken to a kill shelter.

Throughout these shots I am sure Dante was positive I was giving him up so he can live with the alcoholic man he sees in his doggy nightmares. 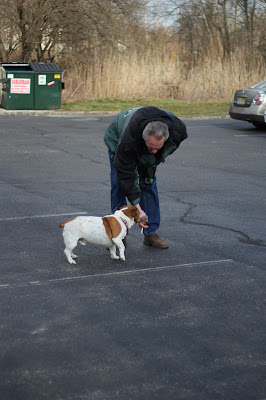 Yes.  The reason I had to wait for him was so that he could go inside and get his flask/three fifty milliliter bottle of Jeremiah Weed Sweet Tea Vodka and his cigarettes.  These are the accessories that make one "look cool."  He was now insistent on me getting a photo of him attempting to give my dog his booze and a smoke.
He thought it was hilarious.

Dante, ever-gullible and sweet-natured was probably thinking he was trying to give him food cautiously smelled it while wagging his tail slightly.

But Dante knew better, he pulled away and simply resigned himself to a state of complete and utter hopeless despair.  He just stood there making no attempts to flee.  When I saw this picture through the view finder I announced we were done and that it was time for me to give him the walk I promised him.

Tony thought the idea of getting a photo of him PRETENDING to give alcohol to a dog was hilarious.  After all he usually has a great time when he himself drinks alcohol.

Now that I am looking at this photo I feel terrible.  Like Dante has been violated in the most cruel manner possible.  He has this dead, distantly vacant stare as though he is trying to imagine himself in a place where his shitty owner whom he thought loved him did not just thoughtlessly hand him over to a scary man who is now trying to get him drunk. He has given up.  He is back in that kill shelter in Virginia.  Except this time the SPCA of Monmouth County is not rescuing him and his roadside Irish Setter buddy.

I promised to never do that to him ever again.  We took a long rewarding walk.  I let him jump in the mud and we ran after deer together on the train tracks.

And with that, I think I am done with Tony for a while.  I can not promise that I will never write about him ever again.  He is too "unique" to never get another story.  But ever since we moved I have been slowly emptying a dwindling pool of Tony encounters.  And believe it or not there are still stories I haven't written. It is true, I do not see him nearly as often as I used to.  Which makes me think he is hidden in that apartment with Bonnie or he really is spending several days a week somewhere else. On the rare instances I do run into him he is assuring me that he only stays here a couple days a week and that I am absolutely forbidden to tell the the rental office people.

But once the story pool is empty, then what?  I feel all I do is write about him and I know I have more stories.

*Like did you know Tony and Bonnie were facing eviction once because of a massive flea and bed bug infestation?  True story.  They tried to blame us and our dog for giving it to them.  They told the rental office we were dirty people and our dog gave them fleas.  We had to have an exterminator come and inspect our apartment and everything.  He told us that he had been an exterminator for ten years and he had never seen an infestation like the one we had living directly above us at the time.
*I never wrote about the night Tony got taken away in an ambulance last August in the middle of the night.   When the paramedics lifted him up in the stretcher $1.27 in change spilled out of his pockets like a big drunk alcoholic pinata.  Weeks later when he came back he told it it was just a little heart attack.  He was fine now.
*Did you also know that Tony got arrested for attempting to break in the door of two young lesbians living in a few units away?  One of them threatened to slit his throat with a knife while standing in her open doorway.
*Speaking of homosexuality, were you aware that Tony is convinced the people who moved into our old apartment are a "bunch of homos"?  Fact.  He told me that he happened to be walking by their window and he looked in and the he said there were two men sitting on the couch together so close that they could have been "kissing cousins".  Which I suppose is fine except one of them is married.  To a female.  Tony told me one day the wife caught them and she proceeded to make a big scene and  destroy the husbands Subaru station wagon.  Despite Tony's stance on keeping problems "in house" they still called law enforcement on them.  Believe it or not, Bonnie is bigger hateful homophobe than Tony.  She called them "faggots" to their faces.  While Tony has a sort of live-and-let-live-policy - so long as you are not trying any "kissing cousin" stuff with me, we're cool.  For once, Tony seemed like the rational one.

I could keep going but that is what most of my stories are of him.  Small fragments which could be explained in a sentence or two.  The fragmentation is an embodiment of Tony.  I have to take these fragments of encounters and cobble them back together so they make any sort of coherence.