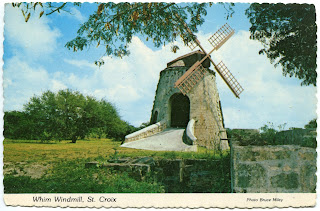 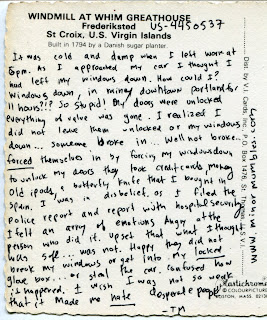 Sent via postcrossing to niek1963.  Who did not really care what sort of postcard they received.

True Fucking Story.  I wish it weren't.
Text:
It was cold and damp when I left work at 6pm.  AS I approached my car I thought I had left my windows down.  How could I?  Windows down, in rainy downtown portland for 11 hours?!? So stupid! My doors were unlocked everything of value was gone. I realized I did not leave them unlocked or my windows down... someone broke in...well not broke...forced themselves in by forcing my windows down to unlock my doors.  They took credit cards, money, old ipods, a butterfly knife that I had bought in Spain.  I was in disbelief as I filed the police report and report with hospital security. I felt an array of emotions. Angry at the person who did it.  Upset that what I thought was safe...was not. Happy they did not break my windows or get into my locked glove box...or steal the car. Confused how it happened.  I was I was not so weak that it made me hate desperate people.
- TM
Posted by Tominor at 8:04 PM