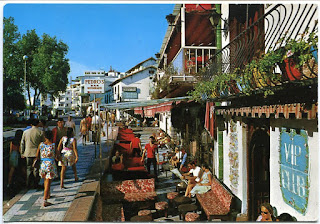 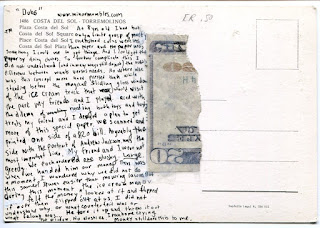 At 8yrs old I had but only a finite grasp of money. I understood coins were less than paper and the paper was something I could use to get things. And I could get the paper by doing chores. To further complicate this I did not understand (and in many ways, I still do not) the subtle differences between wants versus needs. Nowhere else was this concept more hard-pressed than while standing before the magical sliding glass window of the ice cream truck that would visit the park my friends and I played. Faced with the dilemma of needing both toys and tasty treats my friend and I devised a plan to get more of this special paper. We scanned and printed one side of a $20 bill. Arguably the side with the portrait of Andrew Jackson was the most important side. My friend and I were not greedy. We each ordered one slushy. Large. When we handed him our money there was a moment I wondered why we did not do this sooner? It was easier than mowing the lawns. But during this moment the ice cream man felt the “money,” looked at it and flipped it over then flipped out at us. I did not understand why or what counterfeit was or what felony was…He tore it up and threw it out the window. No slushies. I ran home crying. Money still does this to me.

Sent via postcrossing to RailiH.  Not much to say...except I have never in my life scanned and printed money.  Ever.  I found this near the park and I came up with a story.  At least, that is what I am going to tell the police when I am arrested.
Posted by Tominor at 9:14 PM No comments: 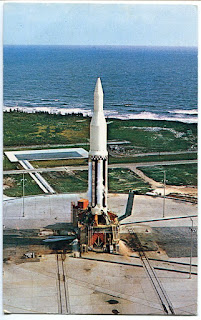 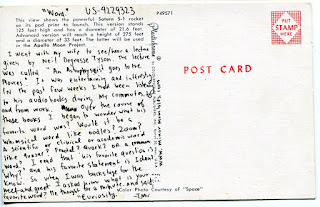 This view shows the powerful Saturn S-1 rocket on its pad prior to launch. This version stands 125 feet high and has a diameter of 21.6 feet. Advanced version will reach a height of 275 feet and a diameter of 33 feet. The latter will be used in the Apollo Moon Project.

I went with my wife to see/hear a lecture given by Neil DeGrasse Tyson. The lecture was called “An Astrophysicist goes to the Movies.” It was entertaining and interesting. In the past few weeks I had been listening to his audiobooks during my commutes to and from work. Over the course of these books I began to wonder what his favorite word was? Would it be a whimsical word like oodles? Zoom? A scientific or clinical or academic word like quasar? Fractal? Quark? Or a common word? I read that his favorite question is “Why?” and his favorite statement is I don’t know. So when I was backstage for the meet and greet I asked him what is your favorite word? He thought for a minute and said, “curiosity.”

Sent via postcrossing to berri.  So yeah. 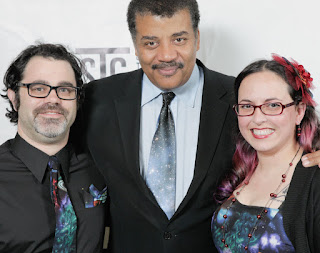 True story, on 9/20 we went to go see Neil Degrasse Tyson speak.  What a brilliant and incredibly nice gentleman.  In the meet and greet afterward he spoke to EVERYONE who came backstage. Answered questions. When my wife gave him one of his flowers he thanked her for it.  I would gladly attend another lecture.  Plus...and honestly, most importantly Sam really enjoyed herself.
Posted by Tominor at 8:33 PM No comments: 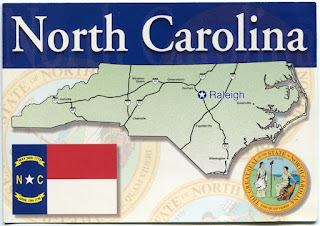 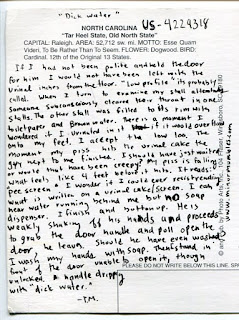 If I had not been polite and held the door for him I would not have been left with the urinal inches from the floor. “Low profile” it's probably called. When I turn to examine my stall attendants someone subconsciously cleared their throat in one stall. The other stall was filled to its rim with toilet paper and brown water. There is a moment I wondered if I urinated in it if it would overflow onto my feet. I accept the low loo. The moment my piss hits the urinal cake the guy next to me finishes. I should have just waited or would that have been creepy? My piss is falling what feels like 4 feet before it hits. It reads: “pee screen” I wonder if I could ever resist reading what is written on a urinal cake/screen. I can hear water running behind me but NO soap dispenser. I finish and button-up. He is weakly shaking off his hands and proceeds to grab the door handle and pull open the door, he leaves. Should he have even washed? I wash my hands with soap. Then I stand in front of the door unable to open it, though unlocked. A handle dripping with “dick water.”

Sent via postcrossing to Ich_bin_Berliner who had SO MANY FUCKING RULES TO WHAT I COULD SEND HIM it's amazing I could send him anything at all.  After reading his profile and all his demands I actually revisited my own profile to edit it and make mine less demanding.  Maybe something was lost in translation.  Perhaps its not that demanding.  Maybe when I reach a point when my postcards sent are in the thousands I might feel entitled to make some demands on those sending me cards.  I am sure its a lot of work. I don't even know what I would do with 5700 postcards.  Hats off to that guy I guess.  But if I have become that bored with what I get from the site...why bother at all?  I don't know maybe when I mail and receive nearly 6000 cards I will have a better understanding.  A state of postcard nirvana that brings no peace...?
Posted by Tominor at 12:05 AM No comments: 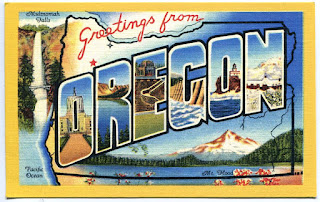 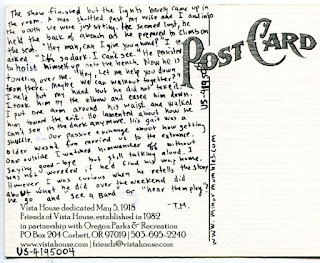 “Dark Side of the Room”

The show finished but the lights barely came up in the room. A man shuffled past my wife and I and into the booth we were just sitting. He seemed lost, he held the back of a bench as he prepared to climb on the seat. “Hey man, can I give you a hand?” I asked “It’s so dark. I can’t see.” He persisted to hoist himself up onto the bench. Now he is towering over me. “Hey, let me help you down from there. Maybe we can walk out together?” I held out my hand but he did not take it. I took him by the elbow and eased him down. I put one arm around his waist and walked him towards the exit. He lamented about how he can’t see in the dark. His gait was a shuffle. Our passive exchange about how getting older wasn’t fun carried us to the entrance. Once outside I watched him wander off without saying good-bye but still talking aloud. I was not worried if he’d find his way home. However, I was curious when he retells the story about what he did over the weekend did he go and “see a band” or “hear them play?”

Friends of Vista House, established in 1982

in partnership with Oregon Parks & Recreation

Sent via postcrossing to buzzeffect who liked getting "Greetings from..." cards.  I had a few of them.  I think this is the last of the cards I purchased during my waterfall revelations earlier this year.  This story on the back is true.  My wife and I went to go and see Pigs on the Wing the pacific northwests premier Pink Floyd cover band.  I had a very nice time.
Posted by Tominor at 8:06 PM No comments: 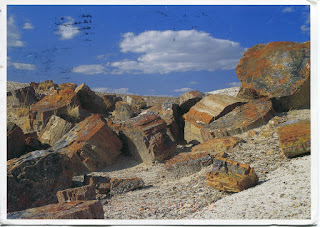 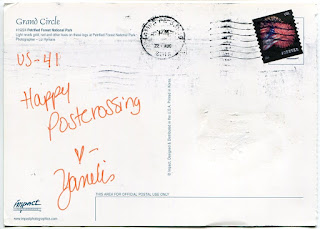 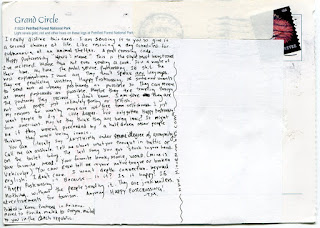 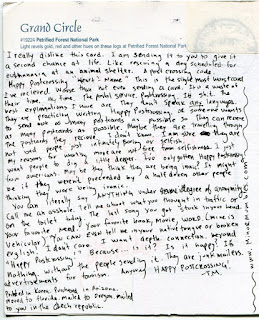 ORIGINAL CARD:
HAPPY POSTCROSSING!
<3
-Yanelis
New Card:
Grand Circle
#19224 Petrified Forest National Park
Light revels gold, red and other hues on these logs at Petrified Forest National Park
I really dislike this card. I am sending it to you to give it a second chance at life. Like rescuing a dog scheduled for euthanasia at an animal shelter. Happy Postcrossing "Heart" name This is the single most worst card I've received. Worse than not even sending a card. It's a waste of their time. My time. The postal service. Postcrossing. It's shit. The best explanation I have is that they do not speak any languages.
They are practicing writing Happy Postcrossing or someone wants to send out as many postcards as possible so they can receive as many postcards as possible.  . Maybe they are traveling through the postcards they receive. I don't know.  I am sure they are not bad people just infinitely boring or selfish. My reasons for writing are not free from selfishness. I just want people to dig a little deeper. I've only gotten Happy Postcrossing from Americans. Maybe they think they are being ironic? It might be if they weren't preceded by a half dozen other people thinking THEY were being ironic.  You can literally say ANYTHING under some degree of anonymity.  Call me an asshole.  Tell me what you thought about in traffic or on the toilet today.  The last song you got stuck in your head.  Your favorite meal. Your favorite book, movie, word (mine is vehicular) You can even tell me in your native tongue or broken English.  I don't care.  I want depth. Connection beyond "Happy Postcrossing!" Because... is it? Is it happy? It's nothing without the people sending it. They are junk mailers. Advertisements for tourism. Anyway HAPPY POSTCROSSING!
-TM.
Printed in Korea. Purchased in Arizona.
Moved to Florida, Mailed to Oregon. Mailed
to you in the Czech Republic.
I realize that some people might need this translated.  And I think this might actually be the first time I have ever posted someone else's postcard on my blog.  I feel...an example must be made.
Sent via Postcrossing to Danusse.  She did not have a whole lot of requests.  She did mention she wanted a card with Johnny Depp.  I don't have any of those.  I don't think I have any pirate ship ones.  All my Disney ones are before Disney made the films...though if I ever find a Pirates of the Caribbean amusement park ride postcard (which would be friggen awesome) I will be sure to link her to the image.
I was a pretty big asshole here.  I think it is supposed to be uncouth or rude to resend people's cards.  I think the worry is that it would be insulting to the person sending it.  That they took the time to send me something and I sort of sully it by sending it back out.  But in a world in which ad-cards exist and "fake" vintage cards, I allowed myself this breach of etiquette.  I also allowed myself the hubris to believe that improved the card.  This card was granted multiple lives!  How many reincarnations before it finds enlightenment?
Posted by Tominor at 6:34 PM No comments: