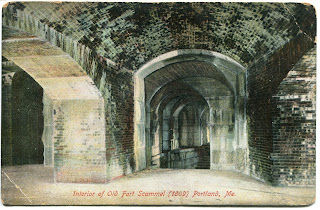 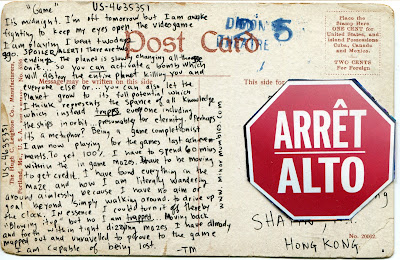 Sent via postcrossing to BYCA

Text:
“Game”
It’s midnight, I’m off tomorrow but I am awake fighting to keep my eyes open. The video game I am playing, I beat two days ago. SPOILER ALERT! There are two endings. The planet is slowly changing all those on it…so you can activate a bomb which will destroy the entire planet killing you and everyone else or...you can also let the planet grow to its full potential which I think represents the spanse of all knowledge which instead traps everyone including the ships in orbit...presumably for eternity. Perhaps it’s a metaphor? Being a game completionist I am now playing for the last achievements. To get 100% I have to spend 60 minutes within the in game mazes. I have to be moving to get credit. I have found everything in the mazes and I am literally wandering around aimlessly because I have no aim or goal beyond simply walking around to drive up the clock. In essence I could turn it off thereby “blowing it up” but no, I am trapped… Moving back and forth within tight dizzying mazes I have already mapped out and unraveled to prove to the game I am capable of being lost.
Posted by Tominor at 7:26 PM