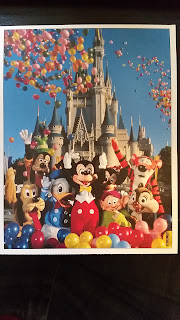 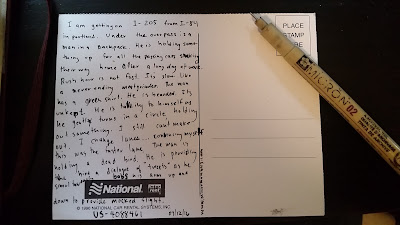 I am getting on I-205 from I-84 in Portland. Under the overpass is a man in a backpack. He is holding something up for all the passing cars snaking their way home after a long day at work. Rush hour is not fast. It’s slow. Like a never-ending meat grinder. The man has a green shirt. He is bearded. It’s unkept. He is talking to himself as he gently turns in a circle holding out something. I still can’t make out. I change lanes…confirming myself this was the faster lane. The man is holding a dead bird. He is providing the bird a dialogue of “tweets” as he simultaneously bobs his arm up and down to provide mocked flight.

Sent Via postcrossing to chocolatebear.  She wanted a postcard with Disney characters or street scenes.  Think I covered my bases pretty well.
Posted by Tominor at 10:05 PM