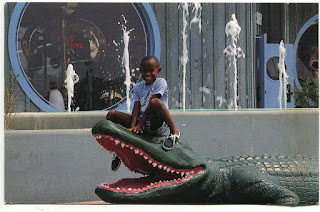 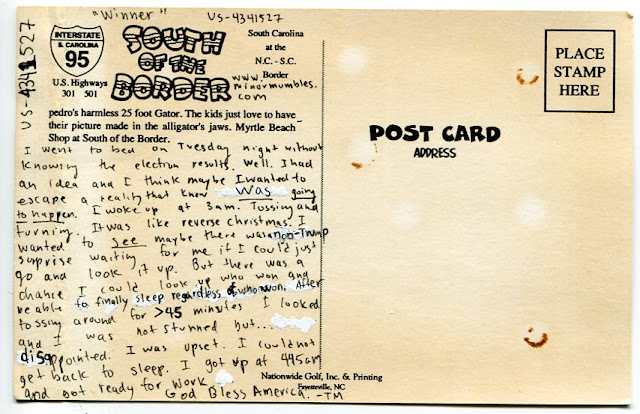 Sent via postcrossing to Wowyna.

I have had this postcard forever. This is one of MY postcards that sit around and collect dust.  I have had this one since I was at the university of South Florida at least 16 years ago.  I put it in a frame and put it on my desk.  There were many times when people would ask me who was the the kid in the frame to which I would usually warmly and proudly utter "my son".  Those marks in the sender section are rust from the rivets in the picture frame used to angle the backing so it sits upright.

I scanned and sent this postcard on November 11th days after the election.  I don't know why I never posted it.  Sometimes scans get lost in my scan folder...better late than never I suppose.  I think the depressive nature hasn't changed much.  I still think he is a bastard and everyone who voted for him or did not vote for anyone are even bigger bastards.

Text: I went to bed on Tuesday night without knowing the election results. Well.  I had an idea and I think maybe I wanted escape a reality that [I] knew was going to happen. I woke up at 3 am.  Tossing and turning.  It was like reverse Christmas. I wanted to see maybe there was a non-Trump surprise waiting for me if I could just go and look up who had won.  But there was a chance I could look up who won and be able to finally sleep regardless of who won.  After tossing around for >45 minutes I looked and I was not stunned but...disappointed.  I was upset.  I could not get back to sleep I got up at 445am and got ready for work.  God bless America.   - TM
Posted by Tominor at 7:13 PM