Yeah, not much has happened since the last interlude but I still feel like I need to post something.
I actually got a homemade card that I could post on my blog where it would make sense. 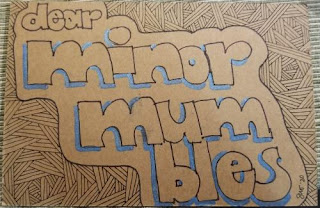 So I received via Postcrossing from sallymo.  Hats off to her for managing to create homemade cards that are probably are not thrown in a rubbish bin by all the people who write "NO HOMEMADE CARDS" in their profiles.
I actually wrote to Postcrossing to ask them when the first instance of "No Homemade" or "No Ad cards" first appeared on someone's profile.  I also asked what country what the person from.  If I knew they would tell me I would take bets on which country said it first.  I have my iDEas what country might have said it first.  [glares in postcrossing].  But how long had Postcrossing been running before the first INSTANCE of someone making a card request that denied certain types of cards like homemade or adcards?  The inception?  Weeks?  Months?  I am curious.
As mentioned in a previous interlude, I have been going through my old posts and transcribing them so that can be cut and pasted as text.  Originally I did not want to even post the backs of the cards.  I felt like it was supposed to be something private and secret between me and the receiver.  But I kiboshed that pretty quick.  Because. Why?  What is the point of that?  Who wants to look at a bunch of postcard images without the backs?
Occasionally since then, I have had a few that I have not posted the reverse side only because I realized it was more of a first draft that I wanted to re-do for a future card.
Then I shifted to concern that people might stealing my writing.  But I realized, how will anything of mine get stolen if no one is reading it in the first place?  I guess I will cross that bridge when I come to it.    If I don't have the writing up why would people want to come to my blog anyway?  To look at the images of postcards?  They can do that on Ebay.  It would break my heart that people were MORE interested in the pictures than what I was writing.   I could accept that people were AS interested in the pictures than my writing.
So I started to transcript the text...but I have a couple of years' worth of cards to do.  It sounds like it's a lot but I probably only did 50 or so cards a year.  I have gone back as far as 2016 or so. The idea was so that people could take the text and enter it into a translator.  I've had a few people write in their native language...but they did so in a cursive script which text grab does not work too well when pulling data.  I am sure the same bodes for my crappy handwriting.
But the act of going back and pulling the stuff out of the cards is tedious and time-consuming and I became frequently annoyed with myself because of how long it took.  I could be actually writing cards.  Another issue is that this process is typically done on my desktop and with my 3-year-old...I can not accomplish much on it between the hours of 6am and 7am before she realizes I am no longer in bed.  I am on the computer and SHE TOO WANTS TO BE ON THE COMPUTER RIGHT NOW SITTING IN MY LAP AND SNEAKING TAPS ON THE KEYBOARD WHILE I AM ACTIVELY TYPING.  My hobby became frustrating and something I do not want to do.
I had the brilliant idea to contact Fiverr.  And pay an awesome someone to transcribe the postcards...leave the transcriptions as comments...and I would simply move the comments into my blog later.  Depending on how this works out I might simply not transcribe any of the future ones. Hopefully actively "hobbying"...will be creating new cards and writing new things.  So right now...I have "hired" jjwood687 to do the work I am too lazy and distracted to do myself.  So in the coming weeks, I hope to have all the past cards punched up. Then I will get these posts up more regularly since I won't have to agonize over the transcriptions and stuff.
I really hope this works out.
Posted by Tominor at 12:34 PM