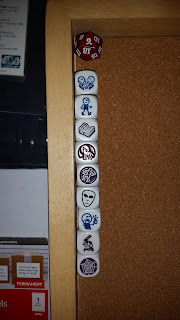 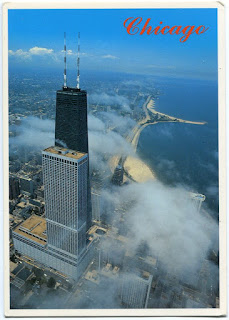 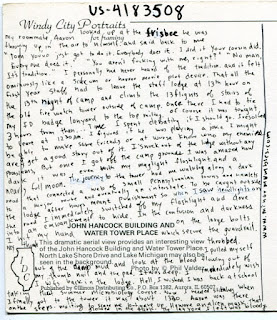 Sent via postcrossing to paisdasmaravilhas who specifically said she wanted cards of Chicago.  I then tried to put a storycube story on the back of it.  At the suggestion of Sam...she suggested that I roll the number dice and then chose dice according to what I roll.  I admittedly liked the idea.  It presented a new challenge.  It hatched a story idea...and then I failed.  Failed pretty hard.  Barely got all the dice in.  I barely got all the story on the card.  I rushed what was actually there.  A poor attempt and I got nearly two drafts of this story done prior to writing the card.  DIFFERENT DRAFTS each time.  Seeing how I wasn't getting anywhere.  I just started writing and two of those dice really fucked my shit up.  The microscope and the alien face.  I might have been able to make pretty solid story if it wasn't for those damn dice.  I need to go back to the drawing board for my story cube game.  Not sure how.  Maybe two number dice.  One die to chose they style of play and the other to chose how many dice from the pool will be chosen.
Posted by Tominor at 11:02 AM

Email ThisBlogThis!Share to TwitterShare to FacebookShare to Pinterest
Labels: looked up, postcrossing, storycubes