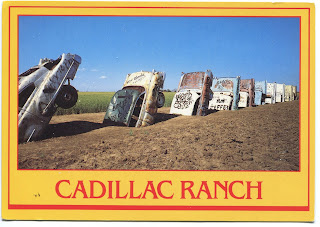 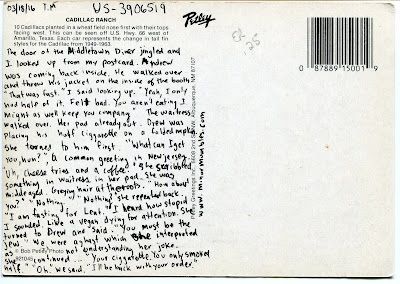 Background:
So.  I bought some story cubes to add a new level of difficulty to postcard writing.  Thing was I had a whole boat load of them.  So I picked up a 20 sided die at Red Castle Games near me and invented a new game.  Roll all the dice.  But what ever the 20 sided dice reads is how many story dice cubes I have to incorporate.  This is LITERALLY the first roll I ever did. 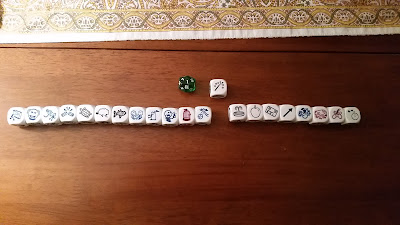 10 Cadillacs planted in a wheat field nose first with their tops facing West. This can be seen off U.S. Hwy. 66 west of Amarillo, Texas. Each car represents the change in tail fin styles for the Cadillac from 1949-1963

The door of the Middletown Diner jingled and I looked up from my postcard. Andrew was coming back inside. He walked over and threw his jacket on the inside of the booth “That was fast.” I said looking up. “Yeah. I only had half of it. Felt bad. You aren’t eating I might as well keep you company.” The waitress walked over. Her pad already out. Drew was placing his half cigarette on a folded napkin. She turned to him first. “What can I get you, hun?” A common greeting in New Jersey. “Uh, cheese fries and a coffee.” She scribbled something in waitress in her pad. She was middle aged. Greying hair at the roots. “How about you?” “Nothing.” “Nothing?” She repeated back. “I am fasting for Lent.” I heard how stupid sounded. Like a vegan dying for attention. She turned to Drew and said, “You must be the Jew.” We were aghast which she interpreted as not understanding her joke. She continued…”Your cigarette. You only smoked half.” “Oh.” We said. “I’ll be back with your order.”

A one.  So I stared at the dice.  Which ONE die?  It was almost even harder than I imagined.  Each die spawned its own story. I almost regret moving them into that straight line because I wish I could have seen what that arrow was pointing at when it landed.  It's like consulting bones or reading tea leaves.  I  remember when I saw the magic wand I first thought it was a cigarette.  Cigarette stories...do I have any stories involving cigarettes?  And that spawned the above story I wrote.  A true story I might add.  I was fasting, hanging out at jersey diner with a good friend of mine.  And the woman let her guard down and casually admitted she might have been a closet racist.  It also helped that this Haley Tan person who will hopefully be receiving the card asked for local favorite foods...a greeting in my native language...and a suggestion where she should go if she ever visited.  Anyone visiting NJ...should probably find a hole in the wall NJ diner and have a cup of coffee.
Posted by Tominor at 11:04 AM