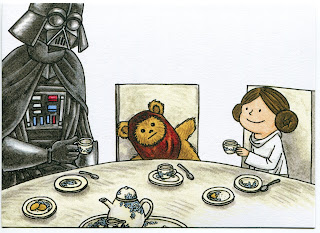 I don’t know why my parents asked. I don’t know why they agreed to get me a flute. They wanted me to “take up” an instrument. I named it the first one that came to my head. Mr. Weisser, my music teacher told me I needed to practice more. I think I practice best at home when my parents don’t want me to practice. My mother has some job when she listens to stuff on her headphones and types and talks to herself. In Spanish usually. This is the best time to practice. Sometimes I would just repeat certain bars or certain notes. Over and over. I would have to fight a smile when she would ask me if I wanted to practice outside. I told her, “I practice inside gooder.” “Better.” She corrected. I know the right way but I know she likes to correct me. A few minutes later my father would come by and order me outside. So, I did. I walk down to the waterfront park. Past the kids from school who never invite me to go play football. I kept walking until I reached a canal that led to the ocean. It was deep. My father would kill me if I ruined my shoes in the canal. So I kept walking until I found an old bridge. My mother would kill me if she found out that I crossed that old broken bridge. From here I could see it. Down the pier I could see the town lighthouse. I knew deep down that would be the perfect place to practice. The sea was splashing against the face of the jetty…the lighthouse stuck out of the ocean and the stones like a huge flute clenched in a giant fist of rock.

Sent via postcrossing to Pinsi 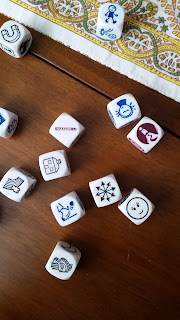 So there you have it.  Nine dice not including the compass rose die.  It is like there is an unseen force guiding me to write a shitty story.  As a side note and for the record I know that one is a rainbow on the left side.  But if you look at it the cloud looks like someone standing next to river or something.  If I don't start brainstorming alternatives to each die these stories could get repetitive really fast.
Posted by Tominor at 2:59 AM