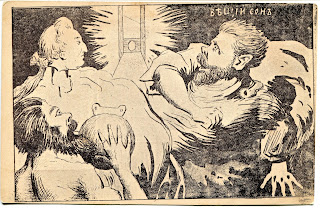 So I went on a bike ride with the woman I am renting from,  Samira.  20 miles of biking.  I think that is a record for me.  In Gresham we reached a park that had a Japanese Garden.  I wanted to write a postcard but I was drawing a blank.  Maybe I was tired.  I offered Samira a postcard and she could sent it to one of the people I have been neglecting on Postcrossing.  So she wrote to Rahmah, some woman in Indonesia. Whose birthday coincidentally is today, April 3rd.     Samira was worried that what she wrote was boring.  I tend to disagree. She wrote about the magic of that Bernie Sanders rally we attended last week on the back of a postcard that shows people fearing a guillotine.  She spoke of chickens excitement, weather, and politics all on the same card.  I don't think I personally could have been any weirder. 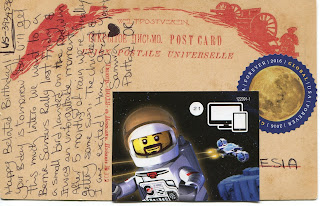 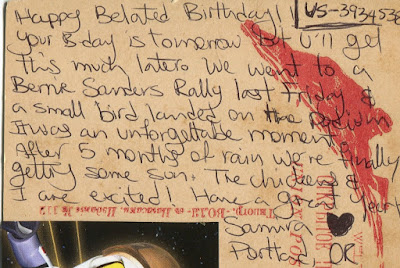 Happy Belated Birthday! Your B-day is tomorrow but you’ll get this much later. We went to a Bernie Sanders Rally last Friday & a small bird landed on the podium. It was an unforgettable moment. After 5 months of rain we’re finally getting some sun. The chickens & I are excited! Have a great year!

Sent via postcrossing to rahmah.