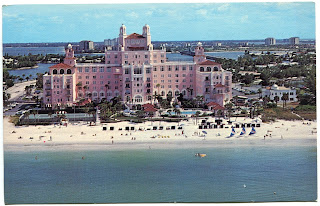 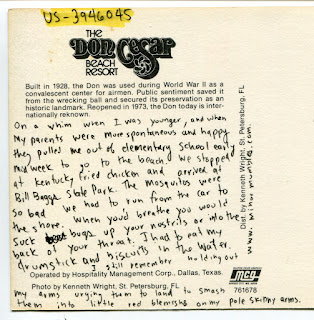 Built in 1928, the Don was used during World War II as a convalescent center for airmen. Public sentiment saved it from the wrecking ball and secured its preservation as an historic landmark. Reopened in 1973, the Don today is internationally reknown.

On a whim when I was younger, and when my parents were more spontaneous and happy they pulled me out of elementary school early mid-week to go to the beach. We stopped at Kentucky Fried Chicken and arrived at Bill Baggs State Park. The mosquitos were so bad we had to run from the car to the shore. When you’d breathe you would suck bugs up your nostrils or into the back of your throat. I had to eat my drumsticks and biscuits in the water. I still remember holding out my arms urging them to land to smash them into little red blemishes on my pale skinny arms.

Sent Via postcrossing to tinkerbellish-USA
Posted by Tominor at 10:41 PM