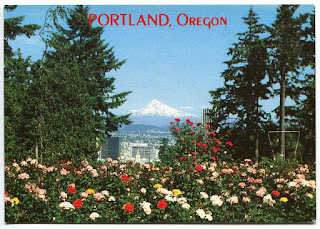 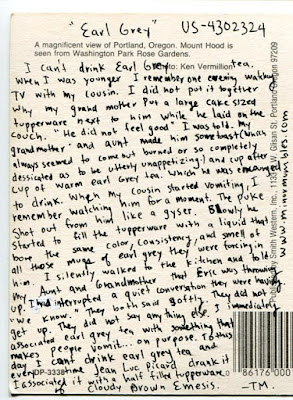 I can’t drink Earl Grey tea. When I was younger I remember one evening watching TV with my cousin. I did not put it together why my grandmother put a large cake sized Tupperware next to him while he laid on the couch. “He did not feel good” I was told. My grandmother and aunt made him some toast (which always seemed to come out burned or so completely always desiccated as to be utterly unappetizing) and cup after cup of earl grey tea. Which he was encouraged to drink. When my cousin started vomiting, I remember watching him for a moment. The puke shot out from him like a geyser. Slowly he started to fill the Tupperware with a liquid that bore the same color, consistency, and smell of all those mugs of earl grey they were forcing in him. I silently walked to the kitchen and told my Aunt and Grandmother that Eric was throwing up. I had interrupted a quiet conversation they were having. “We know.” They both said softly. They did not get up. They did not say anything else. I immediately associated earl grey tea with something that makes people vomit…on purpose. To this day I can’t drink earl grey tea and every time Jean Luc Picard drank it I associated it with half-filled Tupperware of cloudy brown emesis. -TM

Sent via postcrossing to MicSeb who likes flowers, pictures from where I live, landscapes, and photography.  Boom.  This postcard is pretty nifty view.  I will actually have to try and visit this place. There is a part that makes me think I have already written this story.  Oh well.  I like this version.
Posted by Tominor at 1:38 AM