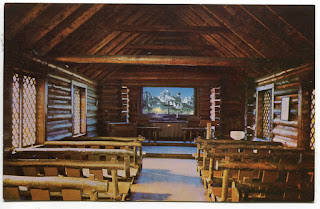 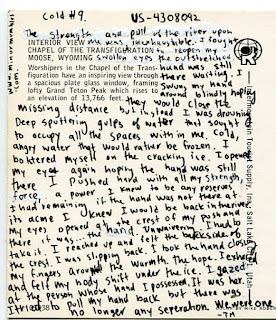 Worshipers in the Chapel of the Transfiguration have an inspiring view through a spacious plate glass window, framing lofty Grand Teton Peak which rises to an elevation of 13,766 feet.

The strength and pull of the river upon me was inexhaustible. I fought to reopen my swollen eyes the outstretched hand was still there waiting. I swung my hand around blindly hoping they would close the missing distance but instead I was drowning deep sputtering gulps of water that sought to occupy all the spaces within me. Cold, angry water that would rather be frozen. I bolstered myself on the cracking ice. I opened my eyes again hoping the hand was still there I pushed hard with all my strength, force, a power I knew to be any resources I had remaining if the hand was not there at its acme I knew I would be back in the river. My eyes opened at the crest of my push and there it was…the hand. Unwavering. I had to take it. I reached up and felt the backside of the crest. I was slipping back. I took the hand closing my fingers around the warmth. The hope. I exhaled and felt my body shift under the ice. I gazed at the person whose hand I possessed. It was her. I tried to pull my hand back but there was no longer any separation. We were one.

Sent via postcrossing to Nordbaer.  I will admit.  I have been delinquent.  Really delinquent.  I have been sitting on three postcards for about 2-3 weeks.  Which is wrong, especially to the people whose addresses I am supposed to send things.  This is a poor excuse but that previous person really took the wind out of my sails.  I really just ceased giving shits about postcrossing.  I really did not care about writing.  Sharing.  Anything.  I wish it translated to me not buying more postcards but it hasn't.  I have been making a killing at estate sales.  I have been doing so well that I think I can start going through and actually getting rid of cards that are doubles or cards that are sort of lame.

So I figured I would finish off my Cold series.  It has been sitting around for a long time.  I really wanted to finish it off on this last card but once again...it refused to fit comfortably.  So it requires another post.