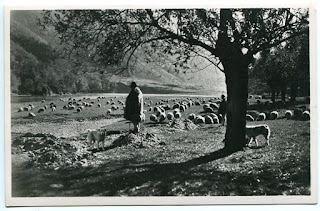 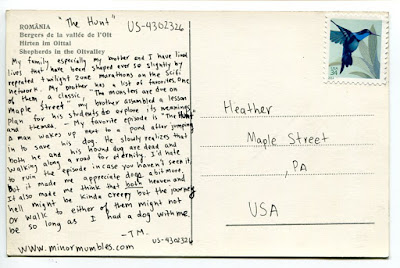 Sent via postcrossing to HDamato who actually lives on a Maple Street.  She did not seem very particular what sort of card she wanted.  My wife and I both liked this postcard for the dog on it.  I don't think I write postcards directly for people very often, but with the maple street address I could only think about Twilight Zone.

The Monsters are Due on Maple Street
The Hunt

I wonder if The Hunt would still be my favorite if I rewatched the series?  I suppose I have homework now.

Text:
"The Hunt"
My family especially my brother and I have lived lieves that have been shaped ever so slightly by repeated twilight zone marathons on the SciFi network. One of them, a classic, "The Monsters are Due on Maple Street" my brother assembled a lesson pan to explor its meanings and themes. - My favorite episode is "The Hunt".  A man wakes up next to a pond after jumping in to have his dog.  He slowly realizes he and his hound dog are dead and walking along a road for eternity.  I'd hate to ruin the episode in case you haven't seen it but it made me appreciate dogs a bit more.  It also made me think that both heaven and hell might be kinda creepy but the journey or walk to either of them might not be so long as I had a dog with me.  -T.M.
Posted by Tominor at 1:52 AM