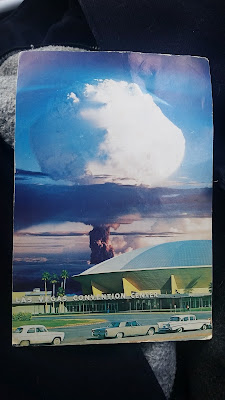 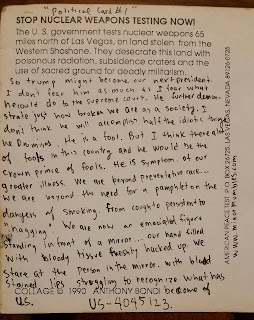 The U.S. government tests nuclear weapons 65 miles north of Las Vegas, on land stolen from the Western Shoshone. They desecrate this land with poisonous radiation, subsidence crates and the use of sacred ground for deadly militarism.

So Trump might become our next President. I don’t fear him as much as I fear what he could do to the supreme court. He further demonstrate just how broken we are as a society. I don’t think we will accomplish half the idiotic things he promises. He is a fool. But I think there’s a lot of fools in this country and he would be the crown prince of fools. He is a symptom of our greater illness. We are beyond preventative care…We are beyond the need for a pamphlet on the dangers of smoking from cough to persistent to “nagging.” We are now an emaciated figure standing in front of a mirror…our hand filled with bloody tissue freshly hacked up. We stare at the person in the mirror with blood stained lips struggling to recognize what has become of us.

Sent Via Postcrossing to betteredthan.  This person asked for a political card.  This was one of the better political cards I have I suppose.  I decided to talk about Trump.  Because...well...politics.