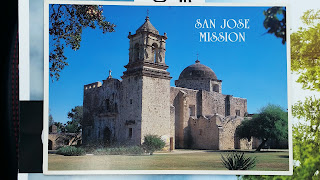 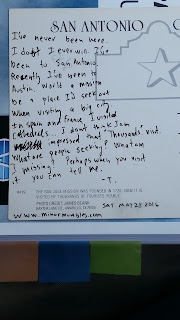 I’ve never been here. I doubt I ever will. I’ve been to San Antonio. Recently I’ve been to Austin. World a mission be a place I’d seek out when visiting a big city. In Spain and France I visited cathedrals…I don’t think I am impressed that “thousands” visit. What are people seeking? What am I missing? Perhaps when you visit it you can tell me. -T.

#419 THE SAN JOSE MISSION WAS FOUNDED IN 1720. NOW IT IS VISITED BY THOUSANDS OF TOURIST YEARLY.


Sent Via postcrossing to EvaOlympia

Addendum: She replied to my postcard via email.


“Dear "T",
thank you very much for your interesting postcard with the awesome stamp!
In asking me about religion and its appeal you are barking at the wrong tree, but it's an interesting question.
I'm neither baptised nor religious in any way and I really can't understand what its fascination is.
Maybe life is easier if you think that there is someone devine who cares about you? I don't know. But life is certainly easier for Catholics, because they can confess their sins, even the worst, and with a little prayer or an Ave Maria and some donations everything is exculpated. What a hypocrisy!
What's your opinion?
Many greetings from Nuremberg, a Franconian metropolitan- city (population about 500.000) in the South of Germany, famous for its historical Christmas market "Christkindlesmarkt" (first established in the 1490ies) with its "Bratwurst und Elisenlebkuchen" (small grilled sausages and flour-free gingerbread), the Nazi parades and "Reichstage" during Germany's darkest ages and the Nuremberg Trials after WW II, the great artist Albrecht Dürer, Peter Henlein, the inventor of the pocket watch, many toy manufacturers (e.g. Playmobil) and the world's largest toy fair.
Today's temperature is about +24°C and it's quite sunny at the moment.
Have a good time, wishing you all the best for your quest,
Eva Olympia.”