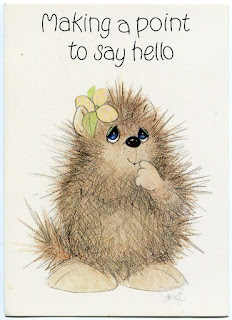 Making a point to say hello 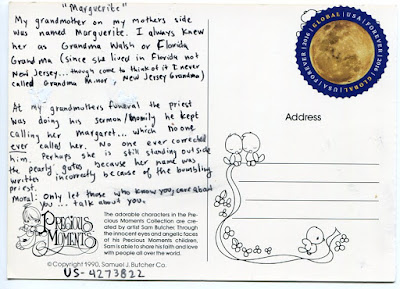 My grandmother on my mothers side was named Marguerite. I always knew her a Grandma Walsh or Florida Grandma (since she lived in Florida not New Jersey…though come to think of it I never called Grandma Minor, New Jersey Grandma)

At my grandmothers funeral the priest was doing his sermon/homily he kept calling her Margaret…which no one ever called her. No one ever corrected him. Perhaps she is still standing outside the pearly gates because her name was written incorrectly because of the bumbling priest.

Moral: only let those who know you, care about you…talk about you.

Sent via postcrossing to MargaritaAlekseevna who wanted a kids card, animals, or a kids hero card.  I can't think of anything more kid-like than these precious moments cards.  I have a whole book I snagged at a garage sale.  I sent this story to a mother who was collecting stories about her daughter's name "Marguerite" I really did not know what to write.  Well.  Let me rephrase that I knew something I could share.   I lamented about writing it for a few days honestly until I threw this story on the card. Finally.  After writing it...I felt badly.  Until my wife said, at 5 years old a child will not have the same existential crisis about death that you are having right now.  So I sent a story about my grandmother's funeral to this little girl.
Posted by Tominor at 9:19 PM