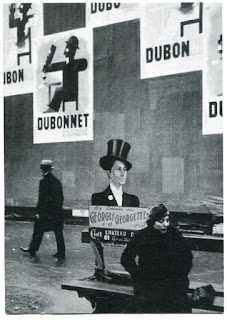 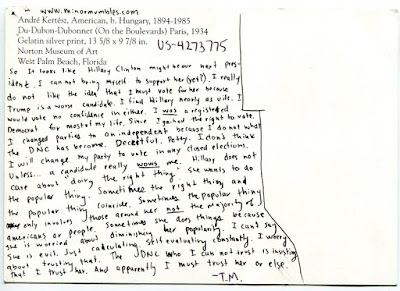 Du-Dubon-Dubonnet (On the Boulevards) Paris, 1934

So it looks like Hillary Clinton might be our next president. I cannot bring myself to support her (yet?). I really do not like the idea that I must vote for her because Trump is a worse candidate. I find Hillary morally as vile. I would vote no confidence in either. I was a registered Democrat for most of my life. Since I gained the right to vote. I changed parties to an independent because I do not what the DNC has become. Deceitful. Petty. I don’t think I will change my party to vote in any closed elections. Unless…a candidate really wows me. Hillary does not care about “doing the right thing.” She wants to do the popular thing. Sometimes the right thing and the popular thing coincide. Sometimes the popular thing only involves those around her not the majority of Americans or people. Sometimes she does things because she is worried about diminishing her popularity. I can’t say she is evil. Just calculating. Self evaluating constantly. I worry about trusting that. The DNC who I cannot trust is insisting that I trust her. And apparently I must trust her or else.

Sent via postcrossing to aleksiite.  She mentioned wanting black and white.  Let's see if this fulfills her wishes. I have been sitting on this postcard for awhile I've wanted to send it. But I really have not found an audience.  Now that Trump is really going viral with his latest fuckup in which he says that as a "Star" he can grab a woman in her "pussy"...I figured I should finish up my political postcard series for now.
Posted by Tominor at 9:19 PM