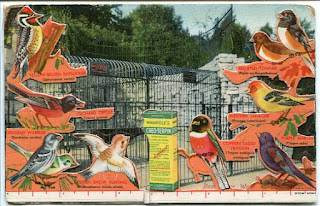 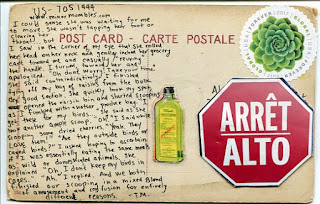 I could sense she was waiting for me to move. She wasn't tapping her foot or clearing her throat.. but I saw in the corner of my eye that She rolled her head on her neck and gently inched her grocery cart toward me and casually "revving" the handle. I turned toward her and apologized. "Oh don't worry! Take your time!"  She said contraindicatively. I finished tying off my bag of raisins from the bulk dry good section. She quickly took my spot and opened the raisin bin and started scooping as I fumbled with another produce bag. ''I get these for my birds... " She said as she took another ample scoop. "Oh?" I said while scooping some dried cherries. "Yeah. They love them!", "Are they outside birds or caged birds?" I asked. Hoping to ascertain if I was essentially eating the same meals as wild or domesticated animals. She explained, "Oh, I don't keep my birds in cages." "Ah." I replied. And we both finished our scooping in a mixed blend of amusement and confusion for entirely different reasons.

Sent via Postcrossing to werewegian.  So in making this card I was reminded of an episode of the Simpsons.

Because I technically ruined two postcards: 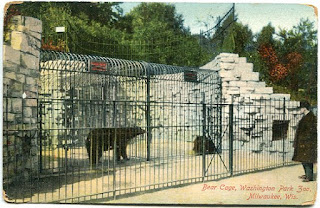 Some Bear cage one from Milwaukee Wis... 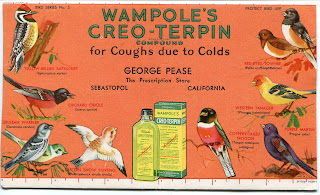 And this old "Wampole's Creo-Terpin Ad Card" which advertised a cough medicine that had as its ingredients Chloroform and Creosote.  Which kinda feels dangerous but is probably not as poisonous as it sounds.  But the back of the card was a soft sort of construction paper that apparently was used to absorb excess ink from fountain pens back in "the day".  The funny thing is this is a pretty neat ad card and by definition, many people on Postcrossing would not want it because it's an ad card.  Stupidly cleverly, I cut it to ribbons before checking about this card.  On eBay, in pretty incredibly crappy condition this card is being sold by someone for 17 fucking bucks.  My card WAS in perfect condition. Whoops. I guess I should have checked that out before destroying it.  I hope he likes it.  He says he has so many cards that I should not worry he will get doubles.  There is no way he has this card now.
Posted by Tominor at 12:03 PM