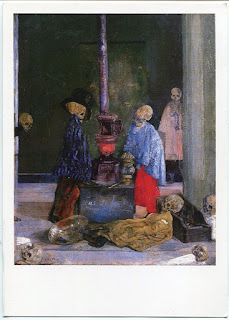 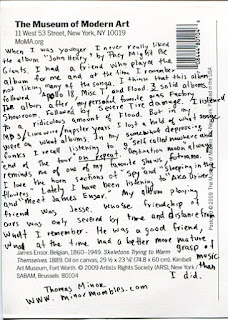 Text:
When I was younger I never really liked the album "John Henry" by They Might be Giants. I had a friend who played the album for me and at the time I remember not liking many of the songs. I think that this album followed Apollo 18, Misc. T,  and Flood. 3 solid albums. The album after, my personal favorite was Factory Showroom. Followed by Severe Tire Damage. I listened to a ridiculous amount of Flood. But in my MP 3 / Lime wire / Napster years I lost ahold of what songs were on what albums, In my somewhat depressive funks I recall listening to "Self-called nowhere" and "End of the Tour" on repeat. "Destination Moon" always reminds me of one of my favorite shows Futurama. I love the horn sections of "Spy " and "Sleeping in the Flowers". Lately, I have been listening to "AKA Driver" and "Meet James Ensor." My album playing friend was Jesse. Whose friendship of ours was only severed by time and distance from what I remember. He was a good friend, who at the time had a better and more mature grasp of music than I did.
Thomas Minor
www.minormumbles.com
So I looked this guy up.  I hope it's him.  2020 is a crazy time and maybe he will get a kick out of getting a card out of nowhere.  Maybe I will come off as a weirdo...I am 99% sure it was the album John Henry.  My memory is not as wonderful as it used to be.  But if it's not him or his address maybe they might take a listen to They Might Be Giants.  You probably should too.
Posted by Tominor at 2:46 AM

Email ThisBlogThis!Share to TwitterShare to FacebookShare to Pinterest
Labels: directswap