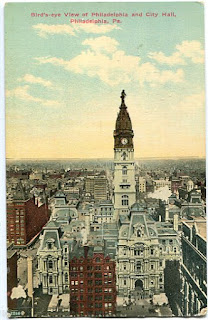 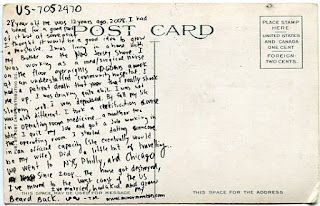 Sent via Postcrossing to Henna168 who requested a Unesco Word Heritage Site postcard.  So she got Independence Hall and a card that I think is actually older than UNESCO itself.   But she also had a whole list of writing ideas including:
4.If you are older than 27 years old:What is the most important things you did when you were 28 years old?
This is the first time as long as I can remember that I have actually liked the suggested prompts that people give.  So kudos and a hats off to her.
Text:
28 year old me was 12 years ago. 2008. I had a beard for a good part of it but at some point, I thought it would be a good idea to grow out a mustache. I was living in a house with my brother on the New Jersey shore. I was working as a med/surgical nurse overnights 40-60 hrs a week at an understaffed community hospital. I had a patient death that year that really shook me up. I was drinking quite a bit. I was not sleeping well. I was depressed. By fall my life was a lot different. I took a certification course in operating room medicine... a month or two later I quit my job and got a job working in the operating room. I started dating someone in an official capacity, (she eventually would be my wife) Did a little bit of traveling...We went to NYC, Philly, and Chicago. Since 2008... The house got destroyed, I've moved to the west coast of the US. I've married, had a kid, and grew my beard back.  -TM. www.minormumbles.com
Posted by Tominor at 10:38 PM