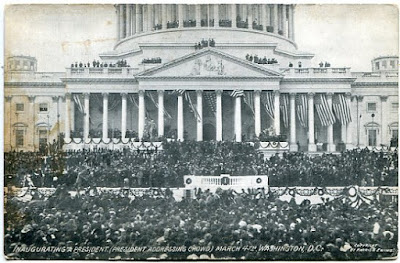 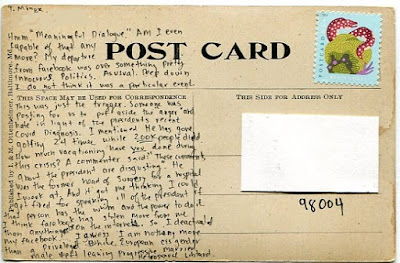 Text:
"Hmm. "Meaningful Dialogue." Am I even capable of that any more? My departure from Facebook was over something pretty innocuous. Politics. As usual. Deep down I do not think it was a particular event. This was just the trigger. Someone was posting for us to put aside the anger and hate in light of the president's recent Covid diagnosis. I mentioned he has gone golfing 24 times while 200k people died. How much vacationing have you done during this crisis? A commenter said. "These comments about the president are disgusting". He was the former head of surgery for a hospital I work at. And it got me thinking I could get fired for speaking ill of the president if that person has the whim and the power to do it. I think Facebook has stolen more from me than anything else on the internets, so I deactivated my Facebook.  I guess I am nothing more than a privileged white European cisgender male left-leaning progressive married heterosexual libtard."
I sent aerobear a direct swap.  True story the up above.  There was a little more to me leaving AGAIN. I was was little blown away the guy said anything.  He had the privilege of retiring just before the pandemic.  He was a nice enough guy when I worked with him.  But the paranoid me...could picture this guy calling up the hospital and complaining about me FOR THINKING IT'S WRONG THAT A PRESIDENT PLAYS GOLF WHILE AMERICANS DIE OF RECORD NUMBERS. WTF?!? Oddly enough, I have not been back to that hospital since that post.  I wonder if there is any correlation? (On a side note I am so paranoid that I went back and edited out my address on this card so people do not come to my house...Fucking deranged.)
This postcard commemorated the inauguration of Woodrow Wilson the 28th president of the US.  This card is probably over 100 years old and I ruined it with my whining.  I think this card is his second inauguration. Holy crap! This is from his first inauguration in 1913.  (The wreaths on the podium are different in the second inauguration). I wonder if to make these historical postcard defacements I could find old stamps and mail them that way.
Woodrow Wilson oversaw the segregation of the United States federal government and he thought the KKK and the confederacy were a great group of guys.  He turned a blind eye to the oppression of blacks through violence and the squelching of free speech. He was in office when the US signed the 18th Amendment (booo!) and the 19th Amendment (yay!).  He got us in and out of WW1.  He presided over the US during the Spanish Flu.  Which he eventually got this flu...had a stroke...and sort of stewed in the White House for a little while.  During this time his wife Edith did a little Weekend with Bernie's with him to keep up appearances.
I have a few of these Woodrow Inauguration postcards.  I think I am going to send one to Pennsylvania Avenue and gently remind the current president that he is a sack of human excrement.  That's legal right? That is covered under free speech because I am not threatening to turn him into a sack of shit since he already is one.  I would merely be pointing that out.  I will probably have to used as few words as possible and use graphs and charts or something though.
Posted by Tominor at 9:35 AM