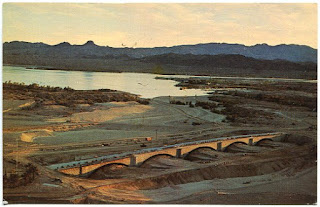 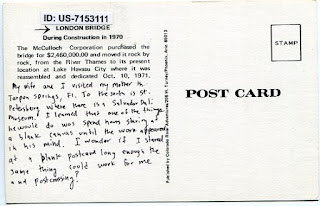 The McCulloch Corporation purchased the bridge for $2,460,000.00 and moved it rock by rock, from the River Thames to its present location at Lake Havasu City where it was reassembled and dedicated Oct. 10, 1971.

My wife and I visited my mother in Tarpon Springs, Fl. To the south is St. Petersburg where there is a Salvador Dali museum.  I learned that one of the things he would do was spend hours staring a blank canvas until the work appeared in his mind. I wonder if I stared a blank postcard long enough the same thing could work for me and postcrossing?

So this was sent via postcrossing to Olgamif who wanted anything London related and is an english teacher residing in Russia.  I am fucked.  Good thing I did not write a whole lot on her card so she can not grade me too much.    I was going through my cards looking for England related stuff.  I found a bunch of stuff.  Old family images of the Royal Family.  Old images of horse drawn carriages in Piccadilly.  But then I found this card which I hope she does not have because of the degree of tackiness.  But I would imagine if someone in Lake Havasu City or Arizona at large drew her name on postcrossing they might have sent it to her.    An image of an American London Bridge being built over a portion of a reservoir  on the Colorado River.