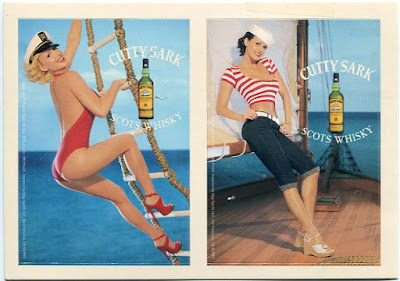 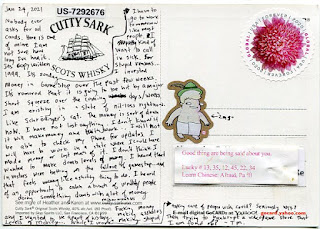 Nobody ever asks for ad cards. Here is one of mine I am not sure how long I have had it.  It's copywritten 1999.   It's Sunday, I have to go to work tomorrow like most people. I kind of want to call in sick for stupid reasons...I invested money in GameStop over the past few weeks. It's rumored that it is going to be hit by a major short squeeze over the coming days/weeks. I am existing in a state of nil-loss right now. Like Schrödinger's cat. The money is sort of down now. I have not lost anything. I don't know if it will make money and with work...I will not be able to check my phone for updates. I will have to work in a state where I could have made money or lost much of it.  I don't think I wanted to make dumb levels of money.  I heard that investors were betting on the failure of GameStop and that feels like a shitty thing to do.  I heard of an opportunity to catch a bunch of wealthy people doing something dumb with a lot of money and I wanted to be apart of history.  Fucking money-making assholes making stupid levels of money....while I work taking care of people with covid?  Seriously.  WTF? Then trying to bankrupt a videogame store that I am fond of? - TM.

I should probably start by saying my first ever disclaimer:  I AM NOT SOMEONE YOU SHOULD TAKE INVESTMENT ADVICE FROM...I am an amateur investor and I mess around with some extra money I make with extra shifts.  I think the stock market is a big gamble and I am investing in companies I believe in...That being said...

Sent via postcrossing to alexaufdembetzenberg.  He wanted an AD card.  I don't much care for scots whisky.  I even stuck a little sticker on it too.  He wrote back...kinda weird reply:

Which just sort of feels like a weird reply.  Like...people playing long stocks on GME have already lost?  Maybe Alexander works in finance?  Maybe he is a short-seller? Maybe he hates GameStop?  I don't think the GameStop thingAmajig has ended yet.  Until they pry the stock out of my cold fucking dead diamond hands, right?  I like the stock.  I like the message it sends.  I like GameStop.  And I fucking hate corporate greed.
His reply... It soooooort of reads like: gloating? But being married to someone for all intents and purposes is from Europe.  I know I am sometimes too sensitive to subtle things from non-americans.  Like getting a False-Positive uhh Negative?  I want to say something is getting lost in translation.
Postcrossing says of the 111 cards I have received...19 of them are from Germans.  So if I have three piles of postcards that I can say are positive, neutral, or negative... I think am going to file this one under a negative experience. So of all my negative experiences, I have had through Postcrossing of which I count 3.  Two of them are German.  I just need a few more data points.
I need to start filing my positive experiences.  Maybe that is what I am going to do from now.  I am going to start favoriting cards based on the experience I had in receiving or sending them not based on if I like the postcard image they sent.  It will make my wall a bit confusing.  Oh well.
Let me close by saying if you are reading this and do not want to get involved in the stock market or anything...go here...and become a proplayer.  Stick your finger in some hedge-funders eye.
Posted by Tominor at 5:20 PM